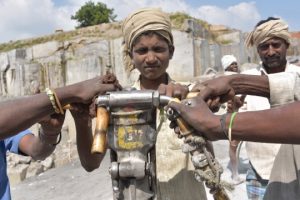 Background: The funeral law was already adjusted in 2014 so that grave stones from child labor were banned ( we reported ). However, the then red-green state government wanted to further safeguard itself and commissioned reports to examine the legal situation and the existence of child labor in countries of origin (including India, China, Turkey). Until the expert opinion was issued, the ban was suspended by a decree in April 2015. (we reported)
Meanwhile, the reports are available: The reports showed, among other things, that child labor can be expected in Indian quarries. (we reported) Of which even quarries can not be excluded, in which material is produced for grave stones. Nevertheless, the state government has not enforced the prohibition of such gravestones until today.

What many do not know: Even if there is no child labor in an Indian quarry, the working conditions for adult workers are sometimes so catastrophic that after a few years of unprotected work in such a quarry, they will get the deadly and incurable disease of silicosis. This also applies to highly industrialized quarries in the south of India , as long as they are not using wet-processing or work with adequate respiratory protection (FFP2). That means: Regardless of the issue of child labor of gravestones, there is a lot to be said for keeping the working conditions in Indian quarries independently controlled so that this does not happen anymore!

On the occasion of the Day Against Child Labor, we call on the government in North Rhine-Westphalia to fulfill its responsibilities and finally ban gravestones from child labor effectively in NRW.