In the 1990s, increasing quantities of granite blocks and gravestones from India entered the German market. A number of large-scale importers were beginning to dominate the market, offering imported stones at dumping prices. Many small and medium-size stonemasons were forced to either file for bankruptcy or participate in the globalized trade system themselves and start importing from India. That was exactly what a group of stonemasons from Freiburg in the south-west of Germany decided to do. However, rather than just import any kind of stones, they wanted to establish trade relations based on non-exploitative principles. 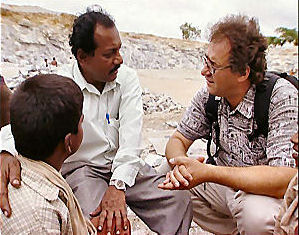 They got in touch with Benjamin Pütter, expert for child labour for the German funding agency MISEREOR, and asked him to inspect Indian quarries and make sure that they did not use child and bonded labour. Pütter and the stonemasons were shocked to find many children under 18 years in those export quarries that were inspected without prior announcement, and that many of the adults working there had to work off debts and received no wages, or wages that were far below the minimum wage level.

These discoveries led to the idea of a certificate for stones from India produced without child and bonded labour, and in 2005 the registered society XertifiX Germany was founded.