We mourn our patron and former chair Dr. Norbert Blüm (July 21, 1935 – April 23, 2020). Norbert Blüm was a co-founder of XertifiX and shaped our XertifiX significantly in the first years. 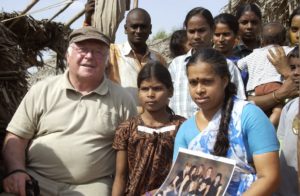 On his trip to India in 2008, together with the then XertifiX Managing Director Benjamin Pütter, he discovered that children worked in quarries and called for measures to protect and rehabilitate child labor both in India and by German importers.

The complaint by tombstone importers against Norbert Blüm was drastic. Its aim was to prohibit XertifiX from taking action against tombstones from child labor. The lawsuit was co-financed by the powerful Indian tombstone association IMMA. This made it clear that in his fight for fairness and justice – especially for those without rights – Norbert Blüm also took on powerful opponents when necessary.

We thank Norbert Blüm for his tireless commitment to XertifiX, for his work against child labor and for the most disadvantaged. We will miss him!