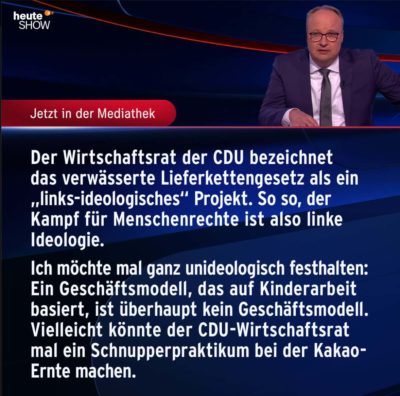 The ZDF on the background of the contribution:
“It is intended to help respect human rights, curb child labor and starvation wages worldwide: The Federal Government’s Supply Chain Act. German companies are to be obliged to ensure that local social and ecological standards are met by foreign suppliers. The law is to apply from 2023 to companies with more than 3,000 employees and from 2024 to companies with more than 1,000. The Federal Cabinet passed the draft law on March 3, and it was debated in the Bundestag in April.

In mid-February, Economics Minister Peter Altmaier (CDU), Labor Minister Hubertus Heil (SPD) and Development Minister Gerd Müller (CSU) presented the draft of the Supply Chain Act at a press conference. In addition to Hubertus Heil, Gerd Müller in particular is considered a staunch supporter of the law. At the meeting he emphasized, for example, that the importance of the supply chain law goes beyond Germany: “It triggers a debate in Germany and in Europe about the future of globalization, about fair globalization.” Müller’s aim was to get companies to commit to violations of human rights also have to be civilly liable within the supply chains – this was not implemented in the current decision, however. […]

The CDU Economic Council in particular is working hard on the supply chain law and is trying to prevent it or at least dilute it. In February he called on the Union parliamentary group to stop “this project”: “In the middle of the Corona crisis, the SPD is stubbornly working on its left ideological issues, while numerous entrepreneurs are afraid of their existence.“