The beginnings of XertifiX 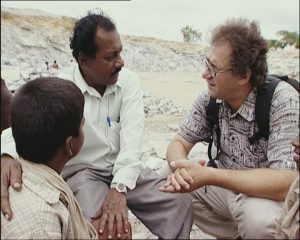 At the end of the 90s, more and more granite blocks and finished tombstones from India flooded the German market. Large corporations rolled up the market with their cheap imports at dumping prices. Small and medium-sized (stonemasons) often remained only the alternative to declare bankruptcy or even to enter globalization (imports from India). This is exactly what several stonemasons from the Freiburg Signum graves attempted to do (including Jörg Bollin , Michael Storr , Dieter Schindler and Burkhard Krupp ), but they wanted to raise these trade relations without “filthiness”.

Thus, it came into contact with Benjamin Pütter, the child labor expert of MISEREOR, who was to look in India, whether in the quarries in India also no child labor and slave labor is available. To everyone’s surprise, however, children under the age of 18 were found in the export quarries, which were visited unannounced, and the adults often had to pay off their debts and were given little or no salary far below the state-guaranteed minimum wage.

In other words, after decades of assuming that there would be little to complain about in export quarries, it was no longer possible to deny the fact that there are child labor in Indian export quarries! The idea of ​​sealing stones from India came into being, guaranteed to be made without child labor and slave labor. In 2005 the association XertifiX was founded together with unions, prominent personalities, politicians and others.

Since 2006, XertifiX controls in Indian quarries and natural stone factories. There we ensure that no exploitative child labor or slave labor takes place, that all ILO core labor standards are respected, and that the working conditions of adult workers are progressively improved. Since 2014, XertifiX has been active in China and Vietnam, where it also controls quarries and businesses for compliance with the XertifiX standard. XertifiX was the first in the world to make the topic known and has since made consumers, retailers and the public responsible for purchasing.

It is the motto of XertifiX that fair employment for adults and good schools and education will open up opportunities for the future of children. From the beginning, we have worked together with a German relief organization to implement social projects for children. Since 2013, there is the association XertifiX social projects e.V., which implements social projects with Indian partners. The special feature: Through the controls, we determine the need for support locally, with our partners of social projects e.V. then the victims are helped directly.